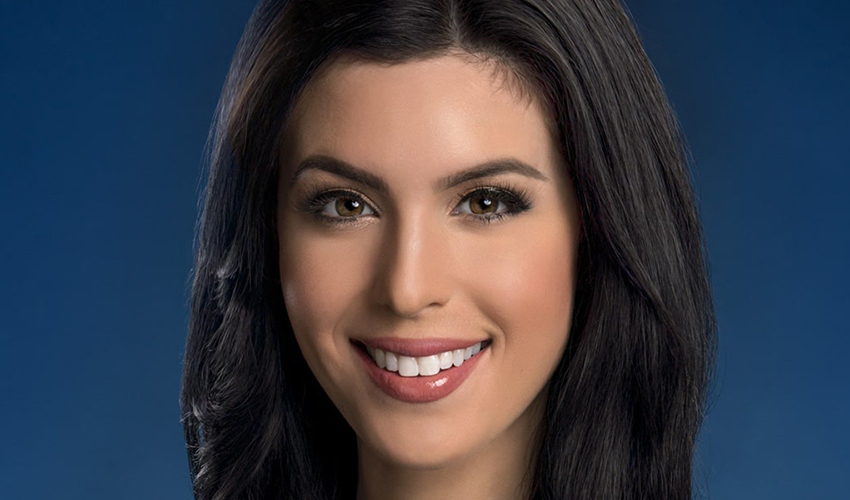 Sara Donchey’s most pivotal moments at San Francisco State University occurred after midnight. On deadline for the Golden Gate Xpress student newspaper, she launched a career that has taken her to television news jobs in Texas, Los Angeles and now back to San Francisco. CBS affiliate KPIX added her to its roster of anchors in January. Just 10 years ago she was drawing editorial cartoons in the Humanities building and learning about what she describes as a special camaraderie that can only be formed in a newsroom.

“The night before we went to print, we were there super late,” said Donchey (B.A., Journalism, ’12), who was an opinion editor at the paper. “You become friends with those people for life. I’m still friends with all of them, including my teachers. … State was just the coolest place. I’ll always love it, and I’ll always love going back to campus.”

Donchey helms the 3 p.m. and 5 p.m. weekday newscasts. At 5 p.m., fellow SF State alum Ryan Yamamoto (B.A., Radio and Television, ’94) sits at the anchor desk next to her. He joined the station late last year.

Although Donchey and Yamamoto attended San Francisco State in distinctly different eras, she says she felt an immediate bond with him, like every Gator alum she meets.

“When I meet other people from State, I know that we had the same college experience, which was really a community,” she said. “The city was our backyard and our playground. And it was an exposure to one of the best cities in the world.”

The entire Bay Area is an SF State classroom within itself, providing valuable lessons for life and career.

“When you live in a city like San Francisco, you are forced to experience life through someone else’s eyes,” said Donchey, who was raised in Los Angeles County. “It just gives you this exposure to culture. … We would learn about these things in the classroom and then we would go out and experience them in our lives outside of school. It’s hard to imagine another college atmosphere like that.”

While Donchey describes the Xpress as her first “living and breathing journalism experience,” the broadcast news medium’s visual storytelling and performance opportunities also intrigued her. She connected on Twitter with a KPIX reporter, leading to a production assistant position at the station after graduating from SF State.

Not all of Donchey’s time on campus was in the Xpress newsroom. Ethnic Studies classes from Lecturer Larry Salomon inspired her with new perspectives, and she and Salomon have remained in touch. She played intramural volleyball, too. In addition, she made sure to never miss a class taught by Lecturer of English Language and Literature George Evans.

“He made me enjoy reading again,” she said. “I have vivid, crystal-clear memories of sitting down in that class. And it was late at night! I went to that class every Friday because it was so good. I think about it all the time. If I ever went back there [to visit campus], I’d want to tell him in person how much I loved his class.”