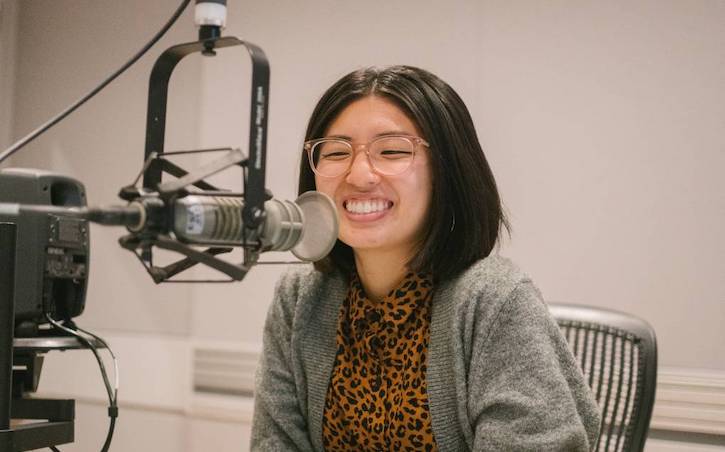 Ericka Cruz Guevarra, the new host of KQED's The Bay, interned at the public radio station through the Raul Ramirez Diversity in Journalism Internship.
Photo by Sean Santos, courtesy of KQED.

Ericka Cruz Guevarra ('17), who studied international relations and journalism at San Francisco State University, is the new host of KQED's The Bay podcast.

She will take over for Devin Katayama, who hosted the podcast from its launch in 2018 until August 2021. In a Q&A on KQED's website introducing Guevarra to listeners, she cites the Raul Ramirez Diversity in Journalism Internship as a key factor influencing her decision to go into public media. The internship was set up to further the goals of KQED Executive Editor Raul Ramirez, who taught journalism at SF State for many years and who died in 2013.

Guevarra notes that the internship was designed to uplift "people from backgrounds that aren't often represented in journalism...funded by this former journalist named Raul Ramirez, who was a queer, Cuban immigrant and longtime journalist in the Bay Area — who left this pot of money because he had the foresight to think about, you know, the fact that our industry lacks representation."

Guevarra also cites the Social Impact of Journalism class she took with Professor Venise Wagner as a major influence.

"I just fell in love with the mission of public media in that class," she says in the interview. "And from there I was like...I want to work at KQED. I was, I think, a sophomore in college at the time, and I was like, "I'm going to get there eventually, and that's where I want to work."