Journalism Department Professor Emerita Yvonne Daley, who touched countless lives as writer and teacher, died Aug. 9 at a Vermont hospital. She was 77.

Daley, who retired from SF State in 2015, had a rare bone marrow cancer requiring frequent blood transfusions. In February, a blood drive was organized in her name in her hometown of Rutland, Vermont.

Family members reported she was surrounded by her husband, children and friends in her final hours.

“Yvonne was a pioneering and relentless reporter; a lyrical, poetic writer; and an inspiring teacher,” said Associate Professor of Journalism and incoming department chair Jesse Garnier. “She motivated me and others to be our very best, offering positivity and praise while holding us to the highest of standards. I will miss her distinctly Vermont timbre, her bluntly direct opinions, her persistent curiosity, and her vocal, supportive compassion.”

Other faculty members and students spoke of Daley as an extraordinary figure, one who had an outsized impact as a mentor and teacher.

Professor Venise Wagner, said in an email, “Yvonne was such an inspiration and support to me when I first started at SF State. I learned so much from her about keeping the class engaged, making assignments meaningful, making my newsroom experience applicable to the classroom.

“She was fierce and nervy, took no guff, and spoke her mind. She was always for the underdog! Because of her I became emboldened to say what I thought.”

The youngest of five siblings, Daley was born on Feb. 5, 1945 in the Boston metropolitan area and grew up in Irish and Italian Catholic neighborhoods in the suburbs north of the city. After graduating from Melrose High School in 1962, she started what she called her “tour of Catholic colleges,” attending Merrimack College, Cardinal Cushing College, and Boston College before earning a bachelor’s degree in English literature and philosophy from Barry University in Miami, Florida in 1966.

She won a graduate fellowship to study philosophy at the University of Dayton, Ohio, where she met the late Steven Gallo, whom she married in 1967.

Before long, the couple joined an exodus of young people who left tense, divided cities to settle in the small towns and backwoods of Vermont in search of a better, more sustainable life.

“I was one of those flatlanders – hippies, if you like – who sought refuge from the Vietnam War, the divisions in our country, and a culture that measured people by how much money they made and the color of their skin,” Daley wrote in the introduction to her sixth book, Going Up the Country: How the Counterculture Changed Vermont and Offers Hope for America.

“In no time, we came to appreciate and share what’s best about Vermont and Vermonters — self-reliance and perseverance, respect for the individual, love of the rural environment, and the right to be different — while also seeing some of our far-out ideas – free health clinics, for example, or same-sex marriage – become realities.”

Daley and Gallo raised five children in rural Vermont, at one point living on a 75-acre farm, growing vegetables and raising two milk goats. The couple separated in 1978 and Daley moved for a time to Florida. But after her youngest son, Asa, died in a swimming accident as a toddler, she returned to Vermont.

In her 30s, she became a reporter for the local newspaper, The Rutland Herald, first covering the small town of Brandon and eventually becoming the newspaper’s state reporter.

She also developed an active freelance career, writing for newspapers and magazines, including The Boston Globe, People Magazine, Vermont Life, Sunset Magazine and The Washington Post. According to an obituary in The Boston Globe, “for a time (she) was the state’s best-known journalist, honored with dozens of New England and state awards.”

While at The Herald, Daley met Charles J. “Chuck” Clarino, a sportswriter, who would become her lifetime partner. After many years together, they finally married in 1993.

Hoping to deepen her writing practice, Daley earned an MFA in Writing from Vermont College in 1995 at the age of 50.

In 1996, Daley spent a year as a Knight Journalism Fellow at Stanford and fell in love with the Bay Area. The next year she started teaching at SF State, and for nearly 20 years she divided time between her cozy house and garden in Rutland and bustling San Francisco.

Yvonne embodied the journalism adage of "comforting the afflicted and afflicting the comfortable." In the field she felt as comfortable using her investigative skills to shine light in dark corners as she did writing richly descriptive features and profiles. In the classroom, she would regale students with tales of her reporting adventures. Students adored her demanding but nurturing teaching style. Some of those students became lifelong friends.

In the days since her death, her Facebook page has been filled with memories from former students, who recalled private tête-à-têtes in her office, long phone conversations in which Daley would bolster their confidence and dinners at her home, often accompanied by the scent of freshly baked cookies or pies.

In 1997, Daley created the Green Mountain Writers Conference, an intimate conference held at a Vermont inn. "I set out to create a different kind of conference for writers," she wrote, "one based on meeting each person where he or she was in their writing life, of celebrating the courage of the newcomer while acknowledging the accomplishments of those whose work had found success." The conference continued annually for 23 years.

Daley wrote six non-fiction books, including A Mighty Storm, about Tropical Storm Irene; The Bend in the Road: The Lenny Burke Story; Vermont Writers: A State of Mind; An Independent Man, a biography about Senator Jim Jeffords; and Octavia Boulevard, a memoir that explores the ways in which money and technology transformed San Francisco during the years she lived there.

In 2015, she retired from SF State and returned to her Vermont home full-time to be close to her husband, children and grandchildren and experience once again the full range of seasons in her cozy home and lush, colorful garden.

In truth, Daley never really retired. She returned to her first writing genre, poetry, and developed a successful career as a poet, publishing in literary journals such as Sojourner, Glimmer Train, Boston Review and Poets Reading the News. Her collection, Prisoner of Hope, chronicles the personal and national highs and lows during the tumultuous Trump years.

Even in the last weeks of her illness, which left her weak with anemia between twice-monthly transfusions, she wrote poems, posting them to Facebook.

Family and friends will gather from 3 to 6 p.m. Aug. 22 at Clifford Funeral Home in Rutland to remember Yvonne Daley. A celebration of her life will be announced. 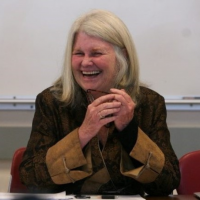 Retired Professor, journalist and poet Yvonne Daley dies at 77
Why do none of the Bay Area native tribes have federal recognition?