Associate Professor Sachi Cunningham is back in the classroom after a productive year-long sabbatical in which she completed work on her first feature-length documentary and continued work on another.

Her film CRUTCH, which premiered at DOC NYC last fall and was a runner-up for audience award there, has screened at various festivals this past year. Most have been online, but recent screenings have included DocLands and the Bentonville Film Festival, which is run by Geena Davis and champions women and diverse voices. Cunningham was able to attend the festival in person in Bentonville, Arkansas.

CRUTCH will come full circle next week as the opening night film at the Reel Abilities Film Festival in Pittsburgh, PA. Cunningham met the subject of the film, Bill Shannon, an internationally renowned artist, breakdancer, and skate punk who performs on crutches when they were both children growing up in Pittsburgh, and much of the film was shot in the city. The film will screen at the Carnegie Museum of Art Theater.

Cunningham notes this screening "will be our first experience watching it in a proper theater with a live audience, which I'm very excited for." You can purchase tickets to watch online here. The film was recently featured by the Pittsburgh Tribune-Review, in the Hollywood trade publication Deadline, and in the Los Angeles Times' fall movie preview.

CRUTCH will stream on discovery+ Oct. 14. Later this month, it will have its international premiere at the Context Film Festival in Moscow, which pairs films with live dance performances.

Cunningham is now working on the documentary SheChange, about the best female big wave surfers in the world fighting for gender equity in one of the most dangerous sports on earth. Her reporting and video on this topic were featured in this cover story in The New York Times Magazine).

"I'm eagerly awaiting to hear about several grants, and am currently onboarding a new investor, so I hope to have good news to announce about that film soon," she said in an email.

Cunningham's video work was published this week in a New York Times feature, "Black Surfers Reclaim Their Place on The Waves" by Diane Cardwell. The footage will also be screened at the Times' "Black in Bloom" live event exploring the question "How do Black folks find meaning in the great outdoors" on Sept. 19 at 11 a.m. PST as part of the Black History, Continued event series.

Cunningham's photo of Santa Cruz surfer Chelsea Woody was on the cover of Marin Magazine's July issue. Woody, a co-founder of Textured Waves, is the first African American woman to surf for the global Vans team.

Cunningham said she's happy to be back to teaching, especially since all three of her classes are in person. You can find her most mornings in HUM 309, inspiring the next generation of multimedia journalists. 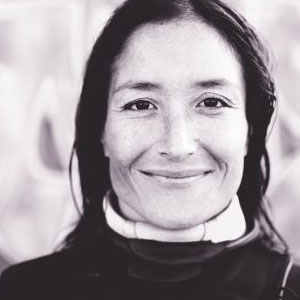