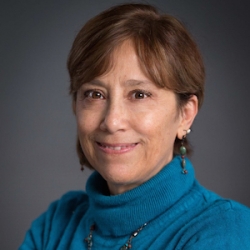 Lourdes Cárdenas is an assistant professor of San Francisco State University. She has been a binational journalist for more than 25 years working as an editor, producer, correspondent and reporter for American and Mexican media in print, television and online publications. Her working experience includes being a producer for the CNN bureau in Mexico City, being editor for Al Día, the Spanish publication of The Dallas Morning, as well as being founder and editor of SomosFrontera.com, an online Spanish publication of El Paso Times. She also worked for Mexico newspapers El Universal and La Jornada.

She is the author of the book "Marihuana. El viaje a la legalización", that analyzes the process of legalizing marijuana in the U.S. and its repercussions to drug trafficking and organized crime in countries such as Mexico.

Her research and teaching interests focus on the impact of violence and drugs across the US-Mexico border and the process of legalizing drugs. She also has focuses on issues related to immigration and the changing face of America; the Hispanic press in the United States and the impact of new media and new technologies in journalism.