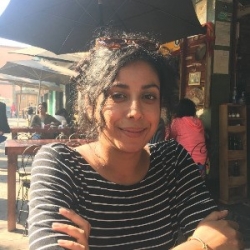 Padmini Parthasarathy is a Bay Area-based print & audio journalist and educator. She mostly explores the intersections of gender, identity, labor, and space, most recently in a piece about the Disneyfication of New Orleans' French Quarter. Her print work has appeared in Bitch Magazine, Jezebel, Next City, Zora Magazine, Outside Magazine, The Times of India and Huffington Post, among others. Her audio work has aired on KALX radio and iPondr, and she has produced for Americans in Paris, a podcast of the American Scholar.