He interviewed Jimi Hendrix before the rock legend overdosed and Jim Jones before the People’s Temple founder and his followers flew off to Guyana and their mass death. As managing editor of Rolling Stone, a reporter for the San Francisco Examiner, and a correspondent for Newsweek, John Burks bore witness to the paroxysms of cultural change that convulsed the nation in the 1960s and ‘70s.

And for three decades after that, he regaled journalism students at San Francisco State University with tales of his journalistic adventures, inspiring them to dig relentlessly, observe carefully and write their hearts out. Burks, an SF State graduate who went on to become chair of the Journalism Department before retiring in 2011, died Feb. 17 of heart disease at his home in Pacifica. He was 83.

Burks had the career many students dreamed of – a National Magazine Award for an investigative piece on the deadly Rolling Stones concert at Altamont, bylines in the hottest magazines on the newsstand, and a few books (he wrote Vans and Working Fire and coauthored Groupies: A Rolling Stone Report and Let It Bleed: Rolling Stones at Altamont). As a music writer and critic, he had interviewed everyone who was anyone in the jazz and rock ‘n’ roll scenes of his day -- Louis Armstrong, Miles Davis, Max Roach, Roy Orbison, Bob Dylan, Mick Jagger, John Lennon, Janis Joplin; the list goes on and on. A talented drummer, he’d even jammed (though never performed live) with a few of them, including jazz percussionist Art Taylor, rock guitarist Carlos Santana and singer/songwriter/multi-instrumentalist Doug Sahm.

“Since he wrote for Rolling Stone magazine and had a storied career as a music writer, students saw him as the rock n’ roll writer and responded to him as the bearer of cool,” said Venise Wagner, a journalism professor and former chair of the department. “Students saw their own possible careers through him. His inspiration carried over through several generations. I was always impressed by that.”

Burks joined the Journalism Department in 1979 with a mission to introduce students to the exhaustive reporting and distinctive narrative writing styles of long-form magazine journalism. While most of the other faculty members at the time had come from “just-the-facts” mainstream newspapers like the San Francisco Examiner and San Francisco Chronicle, he came out of the rollicking, rule-breaking magazine world, a place that had been transformed just a few years before by the “New Journalism” movement. Burks introduced students to literary non-fiction greats like Tom Wolfe, Joan Didion and Gay Talese. He instructed them to use their five senses to report a story and then mine their notes to craft evocative scenes that would make readers feel like they were there.

“I was told, when I began teaching journalism, that the SF State journalistic ideal was right-down-the-middle, giving 'both sides of the story, the well-worn 'objective' approach,” Burks wrote to his friend Michael Winter, reflecting on his years of teaching. “I complied, more or less, when teaching Reporting — though, as a magazine guy, I never really believed in it. The journalism I'd learned was about reporting the hell out of a story, busting your butt until the truths revealed themselves. And writing what was revealed as vividly as possible.”

Burks emphasized the importance of beginning with disciplined fact gathering and using multiple, credible, independent sources who could offer varying perspectives on a topic. There was no substitute for accurate reporting, something he championed at Rolling Stone when he and a small SWAT team were assigned to "edit" Hunter Thompson's meandering, bloated, and often inaccurate stories that Mr. Gonzo Journalist intentionally submitted late and thousands of words longer than assigned on his often-inaccurate belief that the magazine wouldn't have time to slice and dice his excesses.

Burks would not allow (except in the rarest of circumstances) first-person writing on the assumption that "I" distracted from the reader's experience of the topic at hand. He told students that once a topic was selected (a subjective decision that contributed to his disbelief in so-called "objective" journalism) that providing sensory detail, conflict, character, leaps back and forth in time – essentially using the tricks of fiction writing – could help readers understand people and the environments in which they were planted for a more truthful and less boring experience than the “he said/she said” approach of basic newspaper reporting. He encouraged them to experiment with the present tense to bring the reader even closer to the action and unfolding events.

His tough but encouraging approach won him a legion of adoring students.

Walking into his cluttered office, students would invariably find Burks hunched over his desk grading papers, jazz or NPR always on in the background. But grading isn’t the right word for what Burks did to student papers. The letter on each student’s assignment didn’t really matter. It was the comments scrawled at the top, in the margins, between the lines, on the back of the paper, anywhere he could fit them. He “graded” like an editor, prodding his students to do more reporting, to find a more telling detail, to search for a snazzier verb.

Burks talked like he wrote, with a jazzy, train-of-consciousness style that would take a student or colleague on a journey. Students didn’t always understand the sidetracks and jazz allusions, but still, they’d return, eager to hear of his battles with Rolling Stone founder and publisher Jann Wenner and his brushes with celebrities.

It was Burks who convinced Wenner to hire a female photographer by the name of Annie Leibovitz, but it took a trick to get her the gig. When he first broached the idea of meeting with the female photographer in the lobby, Wenner rebuffed him, saying women didn't shoot good images. Burks later returned and simply said someone in reception had some great images Wenner should look at. That worked.

“For years students would tell me these amazing stories John Burks had told them because they were so vivid,” recalled retired Professor Yvonne Daley, who taught in the department for many years alongside Burks. “He loved to tell stories – in print and in person – and the students loved to hear them.”

Burks was a giant of a man, 6-foot-7, with a not surprising passion for hoops. As center for his high school basketball team, he almost went up against a rival school’s star, who would go on to a storied career in the NBA. But Wilt Chamberlain didn’t show up for the game.

Deborah Nagle-Burks, his wife of 33 years, said Burks was acutely aware of his imposing size and how it might scare people off. “He didn’t want to be intimidating,” she said. “He practiced not being intimidating.”

Burks had a particular soft spot for other large men. “He used to give clothing to his big students,” Nagle-Burks said. “He knew how difficult it was to find clothes that fit. In fact, he wrote in his will that he wanted his clothing to go to big people.”

Nagle-Burks hopes to have a memorial service after the pandemic.

In addition to his wife, Burks is survived by his sons, Andrew Burks of Henderson, Nevada, and Jackson Burks of San Francisco; his stepdaughter, Andriea L. Froehlich of Auburn; four grandchildren; and one great-grandson.

Read some of Burks’ work here.

Listen to Burks recall the Jones interview with student Liz Ireland in 2011. 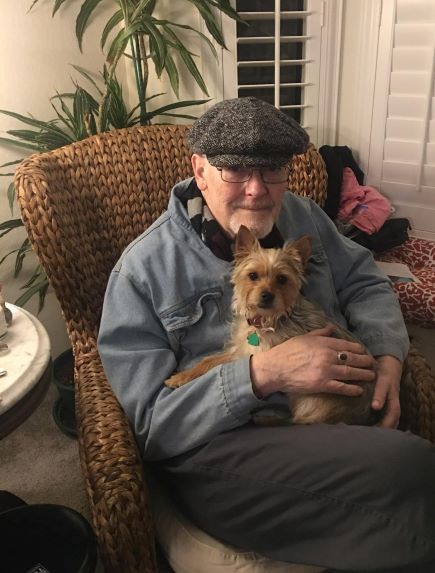 John Burks was a rock journalist, a magazine editor and a jazz aficionado. But for 30 years he was first and foremost a teacher and mentor to students at San Francisco State University.